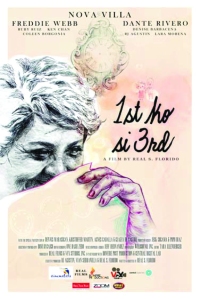 Synopsis: A 65 year-old woman gets reunited with her first love and finally, the supposed first date happens five decades after they got separated.

“1st Ko si 3rd is not a groundbreaking comedy. It is light. It is unpretentious but it is all heart, something some sophisticated or avant-garde films do not possess. The film allows us to feel the unspoken pain between laughter, which is what life and love is all about, isn’t it? Kudos to director Real Florida for creating this ‘little gem.”” (Read full review)

“1st Ko Si 3rd made us feel how time gets us crazy, how it hurts us with memories, and how it makes us stronger by accepting certain truths.” (Read full review)

“It works in multiple levels, and it’s one of those films that manages to touch people the right way. 1st Ko si 3rd is a very nuanced and poignant look into the lives of people in love (that happen to be senior citizens) packaged in an easily accessible, crowd pleasing fashion.” (Read full review)

“It is poignant and tender as it touches on your weakest sensibilities, sometimes to the point of remembering your first love. But the film is never melodramatic, though I felt really sad toward the end.” (Read full review)

“The film was intelligently crafted as it vividly depicts the lives of older people who failed to conceive children. It presents their usual habits and dilemma. The narrative is very fluid that all scenes contributed to the development of the plot and the characters, most especially, of Corazon.” (Read full review)

“While 1st ko si 3rd is a undeniable crowd pleaser, it misses the opportunity to take its story to the next level. The film remains mostly on the surface, unable to provide weight to Cory and Third’s missed love story. 1st ko si 3rd delivers mostly on the laughs. While this hardly detracts from the overall enjoyment of the film, it does leave you with a sense that the film could’ve been so much more.” (Read full review)

“1st ko si 3rd might have old characters in its forefront, but it’s appeal is far more beyond that. It’s bittersweet and charming.” (Read full review)

“Aside from the kilig, the film also depicted the pain of moving on from one’s ‘great love,’ which was quite a good show of balance. It showed how the wistful yearning of past loves could be hopeful at first, but frustrating in the end.” (Read full review)

“The setup is actually pretty lovely, but the film stalls in the back half as the story reveals its themes through long stretches of confessional conversation. And the film doesn’t have the verve to really follow through on the story. It’s sweet enough, but it really feels slight in the end.” (Read full review)

“This would be tiresome if Nova Villa weren’t so watchable. Her face, so open and familiar, is like a time machine.” (Read full review)

“The film brims with humor that doesn’t care whether it succeeds or not—its comic moments are either hit or miss—achieving a lightheartedness that may be strained but not phony, its modesty both its weakness and strength.” (Read full review)

“It tells a story you might have already seen before on a TV drama anthology. What makes this film really special is its star, Ms. Nova Villa. She definitely gives this film in general that vital spark that elevated its common story into one of uncommon poignancy and charm.” (Read full review)

“The film feels dragging as a result, but the excellent performances from the cast push the story to being a snapshot of the lives of the elderly and how they continue to love and all.” (Read full review)

“1st Ko si 3rd is a bittersweet surrender to life. Nova Villa (Cory) carried this film with her perfect comedic timing and earnest moments. But the person that I really cared about was Dante Rivero (Alejandro) because he looks very sympathetic.” (Read full review)

“Real Florido’s 1st Ko si Third was an enjoyable romp through geriatric romance, and a perfect showcase for the talent of the deserving character actress Nova Villa—but it was slight, like an enjoyable one-note joke that took two hours to tell.”

“To a large extent, 1st Ko Si 3rd is like the one who got away. It will please you at first with its charm. It will show some emotions. It will make you hold on to some promise. It will build your expectations for a satisfying ending, but it will fail to deliver. It will leave you wanting more, and wondering what could have been, what should have been.” (Read full review)

“Nova Villa is impossible to dislike. She owns this role but does not overdo it. She’s like your grandma. She’s just really natural in this… But as charming as this movie is, a lot of the dialogue (and this movie is mostly dialogue) in this movie feels forced. If not forced, plain. It’s very expository and not very engaging.” (Watch video review)

“Villa, in her first lead role, shines throughout the film as the embers of her old flame get rekindled as she struggles to adjust with her new life as a senior citizen.” (Read full review)

“It’s quite a lovely idea, but the finished product leaves a lot to be desired. Though it does have some pleasant moments which discusses old age, and some scenes of lightheartedness and true hilarity, the film never reaches the joyous heights that it really needs to reach.” (Read full review)

“1st Ko si 3rd doesn’t require much of its audience. It is contended just with drawing kilig from the idea of senior citizens getting a second chance at romance. It’s not necessarily a bad goal, but it’s not very original either.”

“The film wants to be charming and maybe it was.  It also was trying to be funny.  It succeeded in some aspects but I think that the wooden acting, the uneventful script, and the superficial storyline hindered the film from actually taking off.” (Read full review)