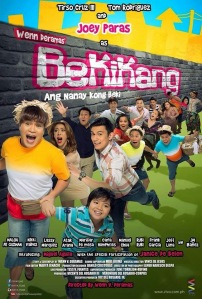 Synopsis: Beki (Joey Paras) is in love with Fortunato (Tom Rodriguez). Unfortunately, Fortunato is in love with someone else, leaving Beki heartbroken when he suddenly leaves to be with Natalie (Carla Humphries), the girl that he got pregnant. But Fortunato shows up at Beki’s doorstep months later with a child in his arms. It turns out that Natalie left him to go to Japan, and he has to go abroad as well. He asks that Beki take care of his child. And despite everything that’s happened between them, Beki accepts. The real trouble starts seven years later, when Beki runs into Fortunato again. He’s reunited with Natalie, and when they see their child, they fight to get him back from Beki.  (Click the City)

“Bekikang is rough around the edges, but it proudly wears its heart on its sleeve, so it’s almost impossible not to feel for its beleaguered characters when the bigoted world conspires against them and bullies them.” (Read full review)

“Despite Bekikang’s attempt at larger themes like family and fatherhood, the film makes no aspiration to do anything drastically different. Its intentional brand of cartoonish comedy makes Bekikang as entertaining as it is escapist.” (Read full review)

“For the first time, perhaps, Deramas did not betray his main character. While the rest of the characters looked one dimensional and caricature-like, which is necessary in slapstick comedies, Deramas’ Beki not only owns the movie but he is victorious ideologically and morally.” (Read full review)

“The film does end up making a statement advocating for the legitimacy of non-traditional families. But this statement is obscured by the broadness of everything else in the picture.” (Read full review)