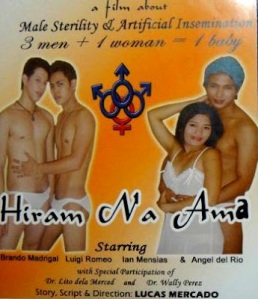 Verdict: Avoid at all Costs

Synopsis: Ross and Peachy (Brando Madrigal and Angel del Rio) have just gotten married. While on honeymoon in Baguio, Brando confesses a secret: he’s sterile. Determined to have kids, the couple considers artificial insemination. The cost, however, turns out to be prohibitive. This prods Ross to consider another solution: he hires two poor students (Luigi Moreno and Ian Mesias) that he meets off the street to impregnate his wife. Ross struggles with his decision, while the two students marvel at their good fortune. (Click the City)

“The bar continues to be lowered for what makes it into our cinemas. How much lower can we go?” (Read full review)

“Like most of his movies, director Lucas Mercado grapples in the dark while he laboriously expounds on his incipient idea. He navigates his narrative with blind skills and tentative exposition.” (Read full review)