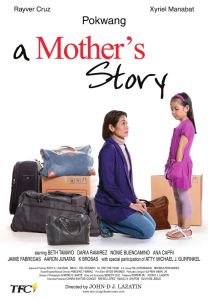 Synopsis: A professional make-up artist reluctantly takes the chance to stay illegally in the United States in order to support her family back home. She later returns to the Philippines to a family that isn’t quite ready to welcome her back. (Click the City)

“Pokwang’s heartfelt performance as Medy transcends her comedic prowess. While the actress’ knack for delivering punch lines is apt for Medy’s candidness and comical antics, the character’s agony in diaspora is brought to life when the audience witnesses Pokwang in the thick of the drama.” (Read full review)

“It is funny without being too gimmicky. It is dramatic without leaving you that emotionally drained after watching. It is cliché but it is refreshing. And as already mentioned, it is our story too.” (Read full review)

“What glues the film together is Pokwang’s brilliant performance as Medy. Known as a comedic actress in ABS-CBN, it is refreshing to know that Pokwang is good in drama. Her presence is enough to convince the viewer to ignore the film’s familiarity and to stay glued to their seats.” (Read full review)

“To cast someone who has personally experienced all the hardships of being an OFW brings out the sincerity of the story making it more believable and engaging.” (Read full review)

“A Mother’s Story is almost transcendent in its first half. Its understanding of the complex emotions involved in having to leave a family behind creates a fuller picture of the experience. But the second half leaves the bitter taste of artificial drama, of conflicts much larger than life, yet somehow less powerful than what’s real.” (Read full review)

“As a whole, though, the movie is fairly well acted. Daria, Nonie, Rayver, Beth, Xyriel Manabat as the youngest daughter and even Anna Capri as Nonie’s other woman all give fine performances. It’s Pokwang who gives an uneven portrayal. She’s competent in some dramatic scenes but there are times she lapses into unnecessary comedy likes she wants to remind us ‘na comedian pa rin po ako’”. (Read full review)

“Many of the characters are caricatures and cardboard depictions – like Medy’s American employers, husband Gerry, Medy’s son King, et.al. – you are somehow taken to the world of Walt Disney where anti-heroes look like villains, growl like devils and move with sinister deportment.” (Read full review)

“As much as the movie wants to showcase Pokwang’s acting skill, which I think were good in the movie, the story and the movie does not take risks and resorted to Hallmark-ish melodrama.” (Read full review)

“The problem with the story is that the director / scriptwriter / producer went through great lengths to find a way to keep Medy in States for seven years, and to keep her there in the most dramatic way possible. We end up then with a caricature of the evil American masters which, given the structure of the movie, is never given much depth.” (Read full review)

” In the end, A Mother’s Story just feels rushed. It could have done so much more with more balanced scenes, better writing, better actors and less absurd reactions. As-is, it’s a pretty messy and amateurish film that had potential to be a real-look into what hardships OFWs face day-to-day but really it isn’t.” (Read full review)

4 thoughts on “A Mother’s Story”