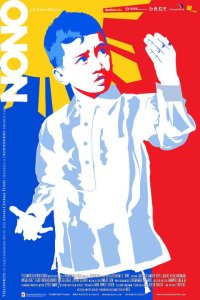 Synopsis: Toto, a very outspoken, highly opinionated eight-year-old born with a cleft lip and an open palate sets off to join his school’s Creative Declamation Competition – a contest of narrative drama and eloquence set on the very high- profiled Philippines’ National Language Week celebration. Speech impediment or not, Toto, armed with iron-clad determination and a desire to be treated like everyone else – no more, no less, takes on the challenge with the help of his lovelorn mother, an emotional bully [Badong] and a stray deaf boy [Ogoy] from his neighborhood.

“Despite the running time, the film was enjoyable, but I think that it could have been better if it had been tighter.” (Read full review)

“A sustained piece of filmmaking. I liked this as much as I didn’t like his previous full length, Si Baning, Si Maymay at ang asong Bobo. Tatak-Rommel is there throughout: the exchanges lively, the cast uniformly hilarious without even trying, the narrative progression never forced. But the best part about the film is it is able to sustain for the whole TWO HOURS the vivacity of his shorts–an achievement, I think.”

“Cute, but too long. daming out of focus shots.”

“It’s only in the last act that the film takes flight. Prior to the climax, the audience is treated to awkward dialogues and unpolished acting. Sayang, maganda pa naman ang premise.”

“He should stick to shorts, methinks. Only liked the fact that the kid wore barong in the end. You’ll know instantly it’s Milo’s work, but I don’t mean that in a good way. Somewhere in the middle parang paulit-ulit and wala nang nangyayaring interesting. Didnt like it