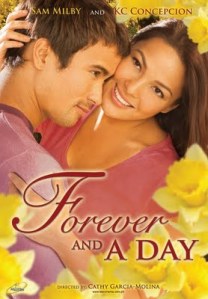 Synopsis: Eugene (Sam Milby), a shoe designer who insists on always being on top of his game, is always on the go. Raffy (KC Concepcion), on the other hand, is making what remains of her life count. They meet in an adventure camp. They fall in love, forcing Eugene to finally admit defeat and allowing Raffy to touch one more life before her predictable demise. (From Oggs Cruz’s review)

“The film is an exposition on acceptance more than it is about dealing with grief, and in more ways, this is an unusually brave project for a mainstream production bent on concessions that usually dumb down their audience.” (Read full review)

“I also like how the movie somehow grounds itself more to reality by steering away from the usual happy ever after and opting for scenarios that would more likely be the case in real life.” (Read full review)

“While still bearing many of the shopworn clichés of the genre, the film finds something bigger and more powerful as it faces tougher truths.” (Read full review)

“Molina should be commended for successfully steering her risky drama without acquiescing to the studio’s penchant for crowd-pleasing endings at the expense of believability.” (Read full review)

“No cute KC Concepcion! – KC has made a living out of playing cute characters but she pulls of a watchable performance as a semi-depressed person. This is her only film so far that she moved me. Risk rewarded!” (Read full review)

” I admire Milby’s command in making the audience feel that he is imperfect and he does this fairly well, despite the fact that he is too charming to be placed on the head-chopping board.” (Read full review)

“KC Concepcion gave a very controlled performance here, probably her best to date. You can see her struggle on the first few scenes in the movie but halfway, she finally found the right footing, and she took off from then on.” (Read full review)

“Despite being overindulgent in parts with certain sequences feeling longer than they should be, the film is fortunately well-made. The film waddles through with beautifully shot passages, convincingly acted exchanges, and adeptly directed scenes.” (Read full review)

“All of that was thrown away because it just didn’t know what it wanted to be – to be that typical, cheesy romantic flick or a more serious and mature experience. A mix of both worlds led to an unbalanced movie with an unbelievable start to a boring snore-fest by the end.” (Read full review)

“By now, you know the drill. Sam smoulders, he overacts and pulls all the leading man tricks: the intense gaze, the angry stare, the teary-eyed look. Meanwhile, KC gets to flex her ‘acting chops’ by playing a sick girl. For the most part she affects a dewy-eyed-I-love-you-but-I’m-dying look and even in her purposely de-glamorized state she delivers a lukewarm and unsympathetic performance.” (Read full review)

“Instead, Forever And A Day took the path that no one with a terminal condition should be made to go through. In the struggle between love and death, it decided to side with love. In the end this only meant agreeing to selfishness, and pain. What an injustice to love.” (Read full review)

“It’s a genre film, yeah, (that’s the operative word: genre!) and has its share of excesses, but it’s a good genre film by Star Cinema standard. The first 30 mins is a buoyant juxtaposition of premise I haven’t seen from Star Cinema yet.”