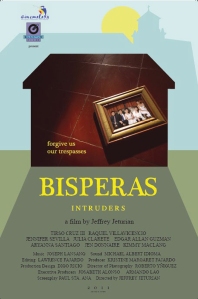 Synopsis: On the eve of Christmas, the Aguinaldo family’s residence is burglarized, causing its members to identify stolen items and uncover lingering sentiments they have hidden from each other.  Amidst the tension brought about by the burglary, the Aguinaldo family realizes how treasured sentiments have been lost, relationships have evolved as they arrive from church at a house in shambles.

“Scriptwriter Paul Sta. Ana crafts his best screenplay yet. The theme of Christian hypocrisy is slowly unveiled before our eyes… The tight story benefits from superb acting. As the characters drown in a cesspool of lies, the mother (Raquel Villavicencio) remains calm and acts as a buoyant lifesaver.” (Read full review)

“In its claustrophobic mise-en-scene, Bisperas draws on a distinctly Bunuelian conceit: the burglarized home littered with damaged belongings and contentious relationships is like the tense and gutted upper-class home in The Exterminating Angel.” (Read full review)

“Jeturian succeeds to show that indeed the home, the self and the community collapse into each other. Yet because of the pervasive centrality of ideals of family, of “blood being thicker than water” we endure the stifling coagulations of family more often than wanted.” (Read full review)

“Bisperas works best when it exposes the faults of a supposedly devout Catholic flock, taking refuge in the church to ask for absolution, looking for a clean slate just so they could continue tending to their worldly desires once outside its walls.” (Read full review)

“The film’s hyper realistic portrayal of a Filipino family makes it an easy target for being called a patience-tester. It’s so realistic it makes other Filipino family dramas look like cartoons and/or exaggerated recreations of families created by people who have never known a family issue in their lives.” (Read full review)

“Uneven only because of certain portions when the film is carried away by an understandable eagerness to reveal the failures of an overbearing Church and its shallow flock, Bisperas is a film that triumphs when it is low key, when its affronts to Catholic hypocrisy are gestured instead of zealously announced.” (Read full review)

“But at the end of the day, why this story? What’s new about family members unearthing their long-buried issues that’s worth telling?” (Read full review)

“Despite the mediocre camerawork, Bisperas opens the mind to the reality that a perfect and religious family hides more than it shows, and that a family’s solidarity is hampered with each member’s secrets.” (Read full review)

“I don’t quite understand the structure of this film, the main story bookended by small stories concerning characters that don’t really have anything to do with the plot. It’s all meant to be symbolic, I’m told, but it ends up feeling extraneous.” (Read full review)

“Some of these points may appear shallow, but characters should have strong individual back-stories for the viewers to be able to understand why they act a certain way. With these questions left unanswered, the audience is left guessing and feeling as if they’re really outsiders looking in—made privy to a night in the life of a middle-class family in crisis.” (Read full review)

“The movie for me feels rather incomplete.  The first part was nauseating, because of the super shaky camera and the poorly lit streets and house.  But the middle, when things start to take its place, was superb and beautifully handled.” (Read full review)

“All in all, the movie felt like a sermon. It wasn’t fun to go through, but you learn the lesson afterwards.” (Read full review)

“Jeffrey Jeturian has a knack of making the ordinary extraordinary. His low-key drama, Bisperas lets its viewers take a peek on the hypocrisy that goes along with the typical, Filipino middleclass family— its absurd fascination with religiosity and Catholic faith completely downplaying the dysfunctions that has long been a problem within family members. The film aims for a story that deftly fleshes out characters at its most real. Easily one of the best ensemble acting I’ve seen in a while.”

“Jeturian can only do so much. He juggles the threads in the air, inside Aguinaldo residence one Christmas eve — and it’s admirable, the way he does it, following the characters with his camera crisscross between rooms and between floors. However superb is Jeturian’s grip is not enough to take a flat script off to a greater height.”

“It’s ironic that the script’s attempts to be subtle (by employing symbols instead of stating the obvious) became too studied, thus, apparent. Too bad director Jeffrey Jeturian stuck closely to it. He seems to have lost his touch after Bing Lao replaced him for Brillante Mendoza as go-to director. It’s also unfortunate that this was released the same year (in the same festival even) as the better Pinoy family drama, Niño.”

“I felt like I was watching caricatures that needed less drama in their lives. Sa sobrang melodramatic, some scenes felt surreal. Technicals were really good, though.”